September is a special month to me. It’s the month I started this blog last year, and though my husband and I met each other at the end of August all those years ago, September is when we became novios. And so today has me thinking about the early days, when we were new to each other, and I was still discovering all the little things about him that endeared him to me…

I first noticed my husband’s escritura, (handwriting) within minutes of meeting him. He gave me his name and phone number, and instead of the chicken-scratch I was used to seeing from American boys, I held in my hands something not only completely readable, but strangely intriguing.

As novios, I looked forward to his love letters, not just for the words themselves, but the way in which they had been written – the form of each individual letter. Everything about him reminded me of how different we were, from our inability to communicate at times, (I read his love letters with an English-Spanish dictionary by my side), to something as simple as the way we write the letter “e”. 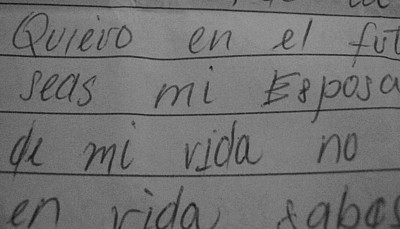 They say “love is blind”, and while I agree with the sentiment, it isn’t literally true. We saw our differences, and were fascinated by them.

Many handwriting experts claim you can’t tell a person’s ethnicity or nationality by their handwriting, but again, I say this isn’t true. (Link is to a PDF titled: “Spanish Handwriting And Spelling” – a document meant for non-native Spanish speakers deciphering Spanish documents to extract information. The fact that such a document exists proves that there are differences!)

Maybe it isn’t fool proof, but I’m able to pick out the handwriting of native born Salvadorans from that of U.S. born Americans. While I haven’t seen handwriting samples from all Latin American countries, everybody in my husband’s family – his mother, his sister, his brother, his cousins and uncles – even completely unrelated Salvadorans I’ve met, all have similarities in their handwriting. I can’t tell you if it’s a uniquely Salvadoran handwriting or a Spanish-speaking/Latin American way of writing, but it is different – and noticing a difference is not a bad thing.

In this politically correct world we’re admonished to look for the similarities, but I say go ahead and look for the differences, and celebrate them, because they’re beautiful.