The Tín Marín Museo de los Niños in San Salvador is next to Parque Cuscatlán. Even though we were there on a day when most of the country was off for holidays, there was absolutely no line when we arrived. The friends we brought with us have lived in San Salvador their whole lives but had never been to the museum which opened in 1999. (We suspect because of the cost. Admission is $2.50 plus an extra dollar if you want to go to the planetarium. That’s $3.50 per person – a very good price to us, but unfortunately not affordable for all locals.)

If you’re trying to remember which famous Salvadoran “Tín Marín” is, (like I did) – give your brain a rest. As it turns out, Tín and Marín are invented characters.

The staff at Tín Marín are incredibly nice and obviously love working with children. Seeing the way some of the young men engaged the kids at the museum was really cute.

They had a lot of fun things to do – a pretend bank, movie theater, airport, doctor’s office, dentist, volcano, fire station, art area, butterfly garden, and more. The first thing we wanted to do was check out the airplane. They have the actual cockpit and whole first class section of a TACA airplane on the property – but the tours are scheduled as “flights” … So while we waited for our departure time, we checked out a section that teaches kids about cellphone use.

I also took my younger son to the “doctor’s office.” A little girl seated at the receptionist desk chatted on a plastic phone. Seeing us at the window, she told us to have a seat. A few seconds later, the doctor, who was all of maybe 3 years old, came out in scrubs. He wordlessly waved us back to the exam room and my son hopped up on the table.

The little doctor whose head barely came above the exam table, reached up and put the stethoscope on my son’s chest and listened for a moment. “Está enfermo,” he said.

“¿Tiene medicina?” I asked. [Do you have medicine?]

The doctor opened and closed an empty drawer. “No hay,” he said. [There isn’t any.]

(Apparently we had gone to the public hospital.) We thanked the doctor and told him we’d get his medicine at the pharmacy instead.

Finally it was time for our “flight” – so we lined up. The Tín Marín guide for this tour was a very well-spoken young man and great with the kids. He would give them information and then ask them questions to see if they were paying attention. At one point he explained that you have to get a passport and a visa to travel to the United States. Then he asked the group, “What do you need to go to the United States?”

The kids obediently answered, “A passport and a visa!” … I whispered to Carlos and his friend, “or cash and a coyote.” … So we started laughing like bad kids at the back of the classroom.

Finally we were able to board the airplane. There weren’t quite enough seats so I gave mine up knowing that some of the people, (including our friend’s wife and teenage son), had never been on an airplane and this was special to them.

After we exited the airplane, we went to check out the rest of the museum.

My favorite part of the museum was the mini grocery store. They had laminated grocery lists you could use, (this teaches reading skills among other things – and for my kids, Spanish vocabulary) – but there weren’t any hard and fast rules. Kids could play however they wanted. So you get your list, (or not), go around with your little cart, get your groceries, and then go to check-out.

At the check-out, the “cashier” was so great with the kids. He would tell them things like, “Ah, you bought milk. When you drink milk you build healthy bones! Good choice!” … After everything had been scanned and put back into the cart, he told the child the “price” and then asked “Efectivo o crédito?”

“Efectivo” was a new word for me. I knew immediately that it meant “cash” but I had always used the slang word “pisto.” (And now I knew why the waiter at the fancy hotel in San Salvador tried not to laugh at me. One evening while I watched the boys swim I felt so sleepy I couldn’t keep my eyes open. I decided to have coffee delivered poolside. The waiter asked how I’d like to pay. I responded, “En pisto.”)

Anyway – the cashier asked my son “Efectivo o crédito?” – My son looked at me for guidance.

“Efectivo,” my younger son said, pulling imaginary money from his pocket and paying.

When the “cashier” went on break, my younger son took his job at the register. 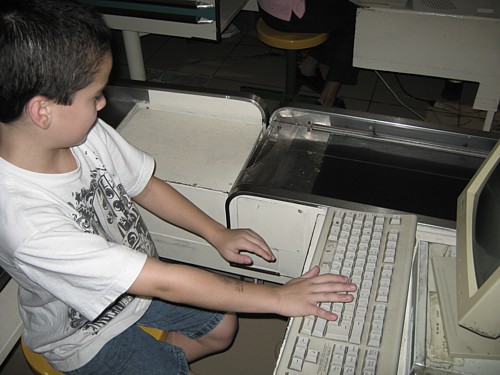 I loved seeing my kids playing with native Spanish speaking children and not having any problems. My younger son checked out several children at his register and asked them “Efectivo o crédito?” – So cute.

My youngest son is actually almost 10 years old but he’s small for his age, and he uses it to his advantage. While other kids his age feel self-conscious playing pretend, he still jumps right in and has fun.

My teenage son tried to act like he was too cool for the museum, but when he saw our friend’s son, (who is also a teenager) enjoying himself, he started playing too.

Is it just me or do Salvadoran teenagers feel less pressured to act “cool” and “mature” when they reach a certain age? … It was really refreshing to hang out with our friend’s teenage son. He taught my teenage son to just have fun and not worry so much about what other people might think. That’s a good lesson for everyone to learn.