The Helplessness of Being Here

Last night Carlos called his best friend, Lalo* back in El Salvador. Ever since we’ve come back, Carlos has called daily because this guy is like a brother to him. Our whole family grew very attached to Lalo, his wife Rosy* and their son, Lalito* – We care for them and think of them each day – living back in Soyapango, struggling to survive under difficult circumstances – wishing we could do more for them.

While we were in El Salvador, it was Lalo and his son who would come to our hotel each day to pick us up and take us where we wanted to go. The first day, Lalo apologized for the condition of his car several times, rolled the windows up and put the air conditioner on full blast. He asked me if I was comfortable even though I knew it was putting a great strain on his little, old car to run the A/C.

Squished in the backseat of a vehicle with no shocks as we drove on roads with enormous potholes, with two overgrown teenage boys next to me and my younger son on my lap, I told Lalo we could turn the A/C off – that I liked riding with the windows down because it made it easier for me to take photos. This was totally true, but I also didn’t want him to go to any trouble for me.

At first Lalo showed us around every mall in the city because they were clean, safe, American-looking, air-conditioned, and, in his mind, very impressive.

One day while eating lunch in yet another food court, Lalo put his chin on his fist and looked at me thoughtfully.
“Are you bored with El Salvador?” he asked.
“Not at all,” I said, “I love El Salvador.”
He smiled kindly. “No, you are bored. I can see it.”
I chose my words carefully.
“I’m not bored… it’s just that, we have malls in the United States.”

I waited a minute for the words to sink in. His face lit up.
“Of course!” he said, “You have all this in the United States!”

“Yes,” I said, “I like to see Salvadoran things that we don’t have. Volcanos, markets… street dogs.”

He smiled. He understood now.

Over the next few days, Lalo became more comfortable with me as he took us to rough neighborhoods, pointed out street dogs to photograph, brought us into the heart of Parque Hula Hula, on crowded buses, to the fair – and not the big fair in Consuma – the small one on Don Rua which is meant for those who can’t afford the fancy one. He was a natural tour guide with fantastic stories to share, and the entire time, he and his teenage son Lalito, kept us safe – told me when to put the camera away, grabbed my shirt to keep me from being hit by a car.

Lalo could tell that we loved El Salvador – all of it, and he became very proud to show us places tourists don’t usually go – the places he once thought of as ordinary. The places he has walked through a million times. 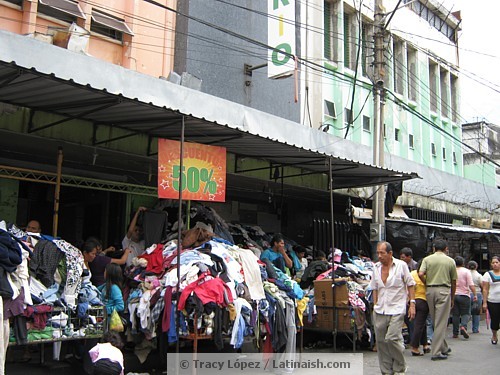 One day as we left the hotel, it began to rain very hard. We stood under the awning trying to figure out how to make our way to the pasarela without getting soaked. Rosy, Lalo’s wife, pulled an umbrella from her purse.

“That’s not big enough for all of us,” Lalo said.

Lalito took the umbrella from his mother and opened it.
“I’ll take them over and come back. We’ll go one-by-one,” he said.
“Take Tracy and the little one first,” Lalo said. “We’ll wait here.”

We started out into the rain. Lalito, who at 14 years old, is already much taller than me, walked protectively alongside us, his wide shoulders making him look very much like a bodyguard. He glanced up to make sure the umbrella was sufficiently covering both myself and my little son.

Just as Lalo and Carlos are like brothers, despite our age difference, (and probably due to a good amount of immaturity on my part), Lalito became like the brother I always wished I had. We spent hours talking about music, language, culture – all things I love – and he has a good sense of humor, too.

As we walked under the protection of his umbrella, my youngest son and I devised a quick plan.
“Want to run?” I whispered in English.
My son smiled devilishly.
“Ready, set… GO!”

My son and I ran out from under the umbrella and into the rain with Lalito running behind us yelling, “Ey!! Ey!!”

By the time we made it to the pasarela, we were soaking wet but laughing so hard that the tears were indistinguishable from the rain drops on our faces.

Lalito went back to the hotel and ferried the others across with the umbrella. When Lalo arrived, seeing me soaking wet, (he didn’t approve of getting wet because he feared we’d get sick), he shook a finger at me.

It sounds funny in English. Few people would use such phrasing, but when he said it to me in Spanish that day, it felt like the truest thing in the world. I felt loved and understood and overall, thankful for such incredible friends.

So last night, when Carlos made his daily call to Lalo, and the phone call ended abruptly with a man’s voice shouting, “Put your hands on your neck!” and Rosy’s voice in the background saying, “That’s my—”
…We feared the worst.

It was dark out already, but Lalo and his family had gone down the street to buy pupusas for a late dinner. That’s when Carlos called. They spoke only minutes before Lalo hung up, amongst shouting and shuffling noises.

For thirty agonizing minutes, Carlos called over and over, but Lalo didn’t answer his phone. We hoped it had only been stolen, but in Soyapango, the outcome could easily be much worse. We struggled with the helplessness of being here, so far from our friends.

They had been attacked, but not by gangs or criminals — by police officers. They had just been standing there minding their own business, waiting for their pupusas, when officers ran up and jumped on Lalito, throwing him to the ground and telling him to put his hands on his neck.

Rosy had been saying, “That’s my son!” when Lalo hung up and asked the police what the hell they were doing.

The police explained that there had been an armed robbery in the neighborhood earlier that evening, and that Lalito matched the description of a man at the scene with a pistol.

Lalo bravely shamed the police officers. “I’ve lived here over 30 years. My house is right over there. This is my son and he’s always with me. You can’t just jump on people like that. He’s just a kid.”

“My house has been robbed three times. Where were you guys then?”

The police officers didn’t answer and instead walked away. The situation ended as quickly as it had began, but we were left shaken. It’s difficult to love those who are so very far away, knowing that the only protection you can offer them is hope and prayer.

____
* Lalo and his family’s names have been changed for their own protection.