We decided to picnic on the National Mall in Washington, D.C. this past Sunday. We went last minute without much of a plan. Everyone showered in a rush and Carlos helped me pack homemade tortas de jamón, bottles of water, apples and potato chips. When we arrived, we saw that some sort of event was going on but by the time we found a parking spot, (gracias a San Antonio who we always call on when searching for parking in D.C.) we were all starving and sat down beneath the trees to eat before investigating.

Soon our picnic attracted a number of uninvited guests and although I don’t think we’re supposed to encourage the wildlife, we couldn’t help but share.

After we finished eating and cleaned up the picnic, we walked over to the big tents to see what was going on. Sometimes I can’t believe my luck.

Out of all the events to stumble upon, we arrived in time to enjoy the Smithsonian Folklife Festival which features different languages and cultures each year.

“The [Smithsonian Folklife] Festival is an exercise in cultural democracy, in which cultural practitioners speak for themselves, with each other, and to the public. The Festival encourages visitors to participate—to learn, sing, dance, eat traditional foods, and converse with people presented in the Festival program.” – Smithsonian Institute website

Many interesting cultures are represented this year but of course I was drawn most to the Latin American groups in the “One World, Many Voices” section. (The other two main events feature Hungarian culture and African American culture.)

I first went to the Isthmus Zapotec tent where I watched a demonstration on how totopos are made by the Zapotecs who live in Juchitán de Zaragoza in Oaxaca, Mexico. Totopos, which are not the same as tortillas despite appearances, are made in an oven called a comixcal and are meant to be crunchy.

There are different kinds of totopos – for example, there are little totopos called “memalitas” and there are oval-shaped ones called “lengua de vaca.” Holes are poked in the totopos with a finger to prevent them from sticking to the inside of the oven. The oven is not used only for totopos but for cooking other foods such as pescado, pollo, tamales de elote and quesadilla de elote. The Juchitecas are famous for their totopos though and most women will make 15 kilos of masa per day through a labor intensive process which involves grinding the corn by hand using a “metate.” One of the women on a panel said they also make “totopos de calabaza con canela” and “totopos de coco” – (which sound delicious to me!)

“The name, totopo, comes from the Aztec (or Nahuatl) tlaxcaltotopochtl. This name is a compound of the word for a tortilla, tlaxcalli, plus the word for thunder. The combination means approximately tortillas that are noisy to chew.” – Wikipedia

The women shared with us how young brides are “kidnapped” by their novios, (it’s a tradition but the “kidnapping” is agreed upon beforehand.) We were also shown the different types of decorative clothing that the bride would wear for her wedding, (the young woman in the middle of the photograph is getting married soon.) I asked what the groom wears and she explained that his clothing would be much simpler – a plain guayabera and black pants. The grooms used to wear sandals but they now usually use black shoes.

I wanted to stick around and listen to more but the boys were getting restless so we wandered over to other tents to explore. Various groups from Colombia were represented.

At one tent visitors could write down their native language, their second language, and a heritage language spoken by a grandparent or great-grandparent, then pin it to the map. (The boys and I wrote “English, Spanish, German.”)

And the reading material throughout the festival was right up my alley. 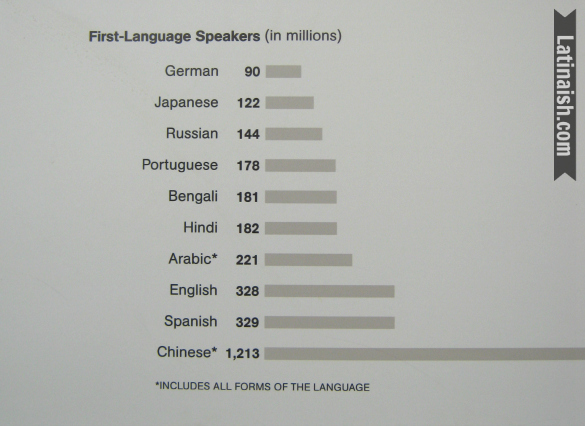 However the sound of Andean flutes lured me away from looking at this interesting map. We watched a music group from either Bolivia or Ecuador play. (I tried to video tape with my phone but the recording doesn’t do them justice.) 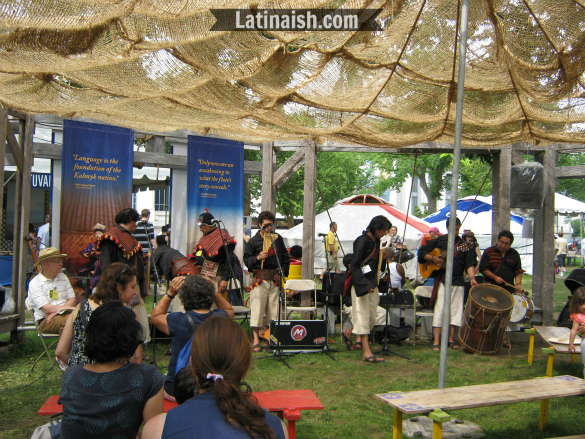 Then I wandered away to look at beautiful textiles in the Kallawaya tent.

Although I wanted to stay and explore more, we had planned to go museum-hopping and the boys were really wanting to move on. As we were leaving we stopped to watch a little Zapotec parade go by. (I would like to note that the woman at the back of the procession tried to throw a piece of candy to us and it hit me in the head, but I forgive her.)

If you live in the D.C. area, don’t despair that you missed this event. The Smithsonian Folklife Festival goes on daily from July 3rd to July 7th – so you still have time to go check it out!

If you don’t live in the D.C. area, the event website is really worth exploring. There are dozens of pages full of information, photos, videos, and, my favorite – an interactive map where you can listen to the featured languages.