A Trip to: Mexico

Editor’s note: Welcome to the Hispanic Heritage Month “A Trip to” series here on Latinaish. This series has been so popular that we’re going to continue it beyond Hispanic Heritage Month! Join us as we virtually visit different Latin American countries through the photos and words of people who live there, have lived there, or have visited and have a lot of love for that particular place. Today F.J. of Bilinguish shows us around Mexico!

Mexico is a fascinating country to visit because it is the largest Spanish-speaking country in the Americas and, with more than 116 million people, the most populous. Besides having great physical diversity, from volcanoes to deserts to jungles, Mexico also boasts a variety of indigenous languages and cultures.

The gorgeous view from atop a pyramid at the archeological site of Teotihuacán is one of the most iconic images of Mexico, but it is just one of many beautiful places to see.

Mexico City is a great place to start exploring; It is one of the largest urban centers in the Western Hemisphere, second only to Sao Paulo, Brazil. The center of the urban area is called México D.F. (Distrito Federal), and it’s surrounded by the state of Mexico. There were about 19 million people living there as of 2009.

The center of the city has a large paved plaza called the Zócalo. There you can find some of the city’s most important buildings, including the city and state government buildings, as well as a Catholic cathedral. Public celebrations, including the country’s Independence Day observance, are held here, too. The enormous Mexican flag is raised and lowered each day. In this picture you can also see some of Mexico City’s famous smog, caused by the city’s geography and vehicles for all those millions of people. There are now many environmental programs in place to cut pollution and clear the air, so to speak. Imagine how impressive a view of the endless city surrounded by volcanoes would look then… ojalá.

Mexico City has been an important place since pre-Hispanic times. When the Spanish conquistador Hernán Cortés arrived in Mexico in 1519, this city was called Tenochtitlán and it was the center of the Mexica (Aztec) empire. The Templo Mayor (principal temple) was destroyed by the Spanish and covered by the modern city. In 1978, some electrical workers digging near the Zócalo stumbled upon a buried artifact from the temple, which renewed public interest in excavating the area. Now you can visit the Templo Mayor archeological site and museum near one corner of the Zócalo. This large statue is one of the many pre-Hispanic objects you can see in the temple.

Just a few hours south of the capital, Puebla is a beautiful colonial city. Although it’s the fourth-largest city in the country, the centro histórico has an old-fashioned feel. Besides the beautiful architecture, Puebla is also famous for its food and traditional talavera pottery.

If there’s one city that captures the essence of Southern Mexico, it’s Oaxaca City. With a more rural feel, more visible indigenous culture, and its own beautiful archeological site, Monte Albán, full of pyramids and ancient ball courts, just outside the city, Oaxaca is worth spending days in. The name of the city and the state are pronounced “wa-HA-ca.” You can buy chapulines (fried grasshoppers) from a sidewalk vendor or walk down a “chocolate road” whose shops and chocolate factory smell delicious. One of the best times to visit Oaxaca is November 1st and 2nd for Día de los Muertos. The city is full of ofrendas (offerings) to the dead, like the one above for Mexican artist Rufino Tamayo.

The Mexican countryside is beautiful too. This picture was taken from the window of a train en route from Guadalajara to the town of Tequila. Visitors tour a tequila factory and see the whole process of tequila-making, from agave cactus (above) to finished product. And they give you “all you can eat” food and drink on the tour- yum!

No trip to Mexico would be complete without tasting some delicious Mexican food. You can sample the previously-mentioned chapulines at many places in Southern Mexico, like the Puebla state fair (above.) Other interesting dishes include escamoles (ant eggs), sesos (cow brains, usually in a taco), gusanos de maguey (caterpillars, usually fried), menudo (tripe soup), and huitlacoche (corn smut, usually in a quesadilla.) 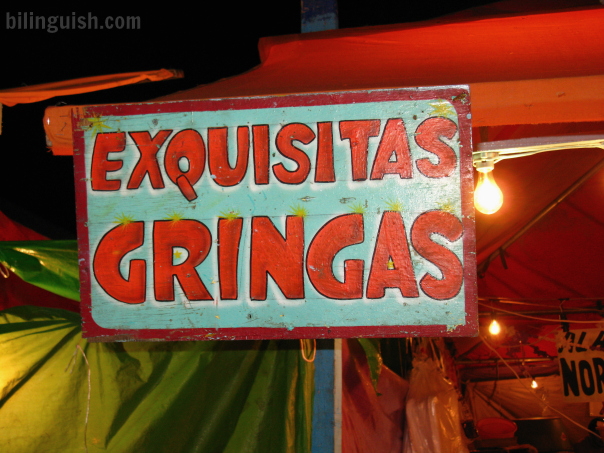 Not all Mexican food has the “yuck” factor, though. There are plenty of dishes that you might recognize from your local Mexican restaurant. Chalupas, cemitas, tamales, atole, pozole, and sopa azteca are some of my favorites, although, to be honest, the “real” versions of these foods that I eat in Mexico are often very different from what you get in Mexican or Tex-Mex restaurants in other countries. There are tacos and tostadas, too, as well as gringas, which are like a combination of a taco and a quesadilla. I took a picture of this sign because, of course, a gringa is also a way to refer to an American woman. (Cue music by The Guess Who.) 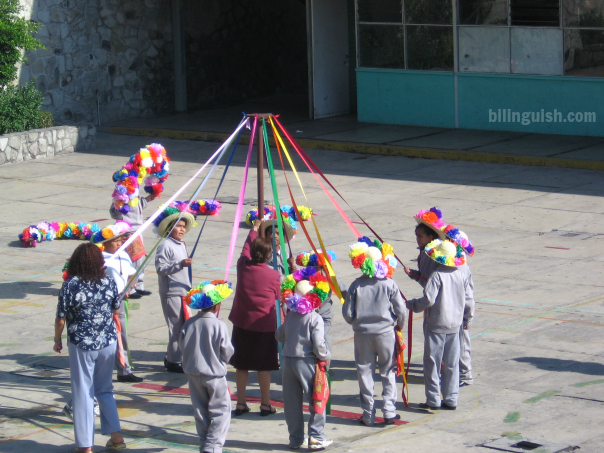 No trip to Mexico would be complete without watching some folkloric dance. Each state has its own traditional costume and dance. The most famous of these is el Jarabe Tapatío, from Guadalajara, Jalisco, known to the wider world as the Mexican Hat Dance. Here is another, called Arcos y Tejedores (“Arches and Weavers”), performed by children at a public school celebration on Mother’s Day.

Many traditional dances have roots in indigenous cultures. These dancers are part of Ritual a Quetzalcoatl, a yearly event performed at the spring equinox on the pyramid in Cholula, Puebla. This dance group was from the Program for Mexican Culture and Society in Puebla, a study abroad program at the Benemérita Universidad Autónoma de Puebla, who learned about Mexican culture and music firsthand through dance.

Editor’s note: Did you enjoy this guest post? If you have some nice photos of a Latin American country you’d like to share as we did here with some short descriptions, please email me to be a part of this special travel series!