Libros for All Kids 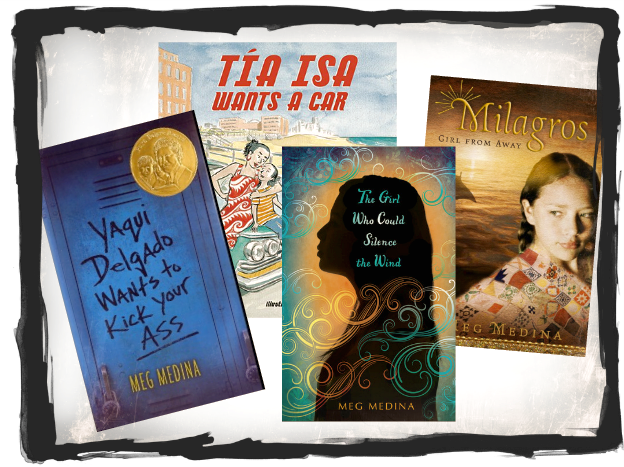 Hola! This is a guest post by Cuban American author, Meg Medina, as part of the Latinas for Latino Lit 2nd annual Día Blog Hop, which we’re proudly participating in for the second year in a row. Check it out! (And then check out the other L4LL’s Día Blog Hop posts from other Latino/a children’s and YA authors.)

Libros for All Kids

Something happened to me recently at the National Latino Children’s Literature Conference that gave me a glimmer of hope against the dismal  – and now familiar – news that we are still publishing too few kids’ books that feature Latino characters.

I had been asked to talk about my young adult novel, YAQUI DELGADO WANTS TO KICK YOUR ASS.  It earned the Pura Belpré medal and the CYBILS Fiction Award, among other nice distinctions, and it was one of the measly two percent of children’s books by or about Latinos that was published last year.

If you’re unfamiliar, my novel is set in Queens, New York, and is the story of 16 year-old Piedad Sanchez who finds herself in the cross-hairs of a school bully.

After my talk, a librarian named Erica came to find me. It’s always such an honor when someone tells you they connected with your story. But I was especially happy to hear from her. She grew up in suburban Wisconsin with all brothers. There were no Latinos to speak of in her world.

“I read your book and I thought, oh my God, that’s my story.”

I could have kissed her whole face.

She’s right, of course. It is her story. It’s her story exactly the way Charlotte’s Web once felt like my story as a kid, even though I’d never seen a live pig and I lived two-hundred miles from the nearest farm in New York.

It’s no secret that I write stories that feature Latino kids and their families – the whole glorious ajiaco that I grew up with and that shaped how I move through the world.

But I do not write stories only for Latino kids. I write books for all kids about the universal problems of growing up. You remember that horror, don’t you? The frustrations with your family? Being betrayed by peers? Falling in love with creeps? To me, it doesn’t matter if a girl is named Fern or Piedad. What really matters is that her story is told with honesty and compassion.

When I think of books and what we want reflected in them, I say that it’s wise to cast a wide net. All kids benefit from stories that not only affirm their own experience but that also that allow them a peek at those same experiences through a slightly different lens. The magic of such books is in that beautiful spot where the unique and the universal hold hands like good and faithful friends.

Meg Medina is an award-winning Cuban American author who writes picture books, middle grade, and YA fiction. The first American citizen in her family, Meg was raised in Queens, New York by her mother – and a clan of tios, primos, and abuelos who arrived from Cuba over the years. She was the fortunate victim of their storytelling, and credits them with her passion for tales.

Meg’s work examines how cultures intersect through the eyes of young people, and she brings to audiences stories that speak to both what is unique in Latino culture and to the qualities that are universal. Her favorite protagonists are strong girls.

Her books are: MILAGROS GIRL FROM AWAY; TIA ISA WANTS A CAR, for which she earned the 2012 Ezra Jack Keats New Writers Award; THE GIRL WHO COULD SILENCE THE WIND, a 2012 Bank Street Best Books; and YAQUI DELGADO WANTS TO KICK YOUR ASS, which was the winner of the 2014 Pura Belpré Medal, which is presented annually by the American Library Association to a Latino writer and illustrator whose work best portrays, affirms, and celebrates the Latino cultural experience in an outstanding work of literature for children and youth.

When she is not writing, Meg works on community projects that support girls, Latino youth and/or literacy. She lives with her extended family in Richmond, Virginia.